The BarnBridge idea began in Q2 of 2019, at a time when the total TVL of all of DeFi was less than $1B. BarnBridge delivers a range of products that allow investors of all skill levels to manage their individual portfolios and risk exposure through a secure, decentralized, and permissionless platform. At scale, BarnBridge creates an opportunity to trade in and out of any risk exposed position for any asset in the world. With infinite liquidity, the project can build an unlimited number of products and hedged strategies. The BarnBridge products are structured to mirror their counterparts in traditional finance, providing an intuitive on-ramp for institutional participation in DeFi.

Smart Yield allows users to tranche out the yield from the debt pools of other projects, such as Aave, Compound, Cream or Yearn Finance, and normalize the risk curve via the creation of derivative assets. Users are able to buy ‘junior’ or ‘senior’ tokens, representing different tranches. Junior token holders provide liquidity and buy risk from senior bond investors. The risk is variable rate annuities going below the expected level, whereas those who buy senior bonds will have a guaranteed yield/interest rate for the life of the bond. Juniors benefit from the extra rewards generated by tokens locked by seniors in cases where the variable APY of the underlying lending protocol (including the governance token rewards) are higher than the weighted average guaranteed yields of the seniors. Junior tranches are ERC-20 fungible tokens. Senior tranches are ERC-721 (NFTs) non-fungible tokens.

BarnBridge has a strong community, many of whom are BNT enthusiasts and current liquidity providers. At the time of writing, if 100% of BarnBridge’s liquidity on Uniswap migrated to Bancor, the pool would be in the top 10 most liquid assets on the Bancor Network. Bancor is a highly respected project within BarnBridge circles, and the consensus on our community channels is that we would prefer that Bancor be the de facto DEX for BOND liquidity provision and trading.

In recent meetings with the Bancor team, the possibility for dual liquidity mining was discussed. When the feature becomes active, the BarnBridge DAO is interested in exploring using its own liquidity incentives on the pool, and assisting the BancorDAO in growing its TVL. This requires a BarnBridge DAO decision, but as fans of the Bancor protocol, is unlikely to encounter much resistance.

BarnBridge will soon be launching its Smart Yield product, which will create jTokens. The jTokens represent an additional opportunity for extension of BarnBridge’s asset network, built upon the BNT base token. Such extensions to the Bancor network may proceed via a formal whitelisting process, or via the Origin Pool design, described in the most recent progress update. In short, the BarnBridge community is committed to creating a long-term liquidity position with Bancor, and becoming part of its ecosystem in a meaningful way. We see our two communities as having a common interest in the future of DeFi, and we are looking forward to using this first pool as a means to establishing a lasting friendship. 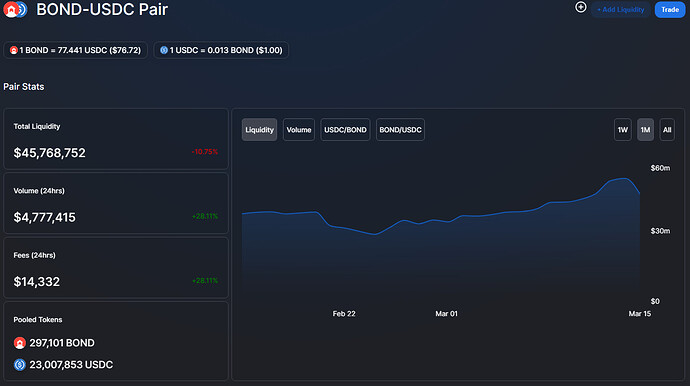 The total supply of BOND tokens is 10,000,000. Decentralization is a core feature of the protocol, and is reflected in the token allocation. Distributing tokens in a way that facilitates decentralization is critical as it gives agency to the users of the protocol and ensures governance never resides in the hands of a powerful few. Importantly, from the perspective of the BancorDAO, there are no ‘super whales’ that can threaten the insurance mechanism or rug the token’s price. The minting function is also inactivated; schemes such as those affecting PAID, and bugs such as the one that affected YAM are a non-issue for BOND. Therefore, the IL liability remains entirely dependent on market behavior, and the BOND token is an unlikely candidate for the most common variety of deliberate, or accidental rug-pull liquidity exploits. 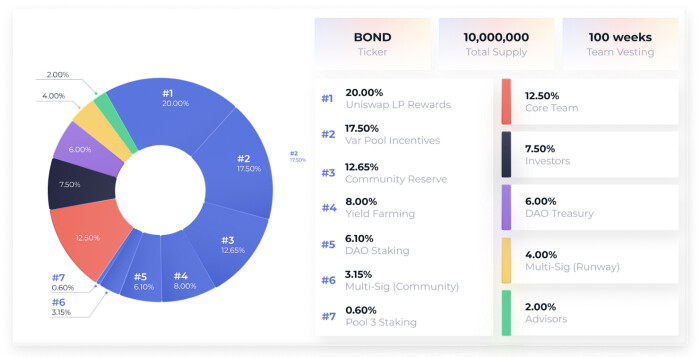 Tokens allocated to the Founders, Seed Investors, and Advisors are locked in a smart contract that releases the tokens on a weekly basis over a two year period. Additionally, to further decentralize the token distribution, yield farmers, liquidity providers, and those who stake the BOND token in the DAO also receive tokens on an ongoing basis until the BOND token has been fully distributed as shown in the schedule below.

Looking forward to getting this to a vote later this week. All questions and feedback welcome. Great job on this @Link_of_riche

Yes lets get them on here. Good for the users and DAOs of both Bancor and BarnBridge, good for the whole ecosystem

@mbr @nhindman Thanks for your support in putting this together.

Open to answering any questions the community has about BarnBridge.

This was very close to making it. I think if we can get a definitive commitment from the Barnbridge DAO that the BOND-BNT pool will be incentivize by BOND tokens then it shouldn’t have a problem getting whitelisted (see the armor proposal as an example with a clear reward allocation). After all, Bancor is putting up roughly 7M-8M in single sided liquidity and potentially more if this pool fills up 100%. Relationships are a two way street and you have to give in order to get.

We actually made it with a 40.29% quorum.
The quorum widget on Snapshot is pinging the current block instead of the snapshot block.

This info was shared in the telegarm channel: Telegram: Contact @bancortraders and discord: Discord

I have participated in Barmbridge since it first launched in October and Bancor since the start of the IL protection program. Both projects are solid with great potential to disrupt traditional finance (my current day job). Community cross pollination will yield extra benefits beyond silo operations. Thanks for detailing a solid proposal.