Proposal: Increase Trading Fee in steps on the LPL pool from 1% to 5%

This proposal is expected to appear on Snapshot for voting on 2022-07-31T15:00:00Z. Make sure to stake your vBNT for voting before this date and time to participate in the DAO decision.

Figure 1 - Current information for the LPL pool on B3:

There are currently two pools besides Bancor on Uni V3 and V2, with 16.71k & 9.7k liquidity, respectively.
As seen in Figure 4 a swap of 5 ETH to LPL currently has a 34.35% impact on UNI V3 and a 4.85% impact on Bancor.
This confirms again that Bancor can provide the best price for LPL traders and thus set an increased fee on our pools without the risk of being undercut by the competition.

I propose the following schedule for the gradual increase in the trading fee:

All steps will be performed weekly with the last week gathering all the data and analyzing the results.

I think we should do this in a step-wise manner since we did a similar experiment with $TRAC (raised them all the way to 4%). We found out that 2% was the optimal fee to get the most profit for LPs.

I suggest something similar:

I would say in this case we’re not even competing with rival pools.
The liquidity difference is just so big that even with a 5x

But I do like your suggestion.
What if we did the following:

Is that all right? @glenn

@glenn @AnimaDunk what if we split the liquidity in half and run one pool on 2% and one on 5%?

we can take data from both pools in parallel

Hey, it was the same with the TRAC pool as there was little to no liquidity anywhere else

. I do like your suggestions though and I think it is a good start for a fee experiment. We can always revisit 2% if 5% or 3% don’t yield the estimated results.

what if we split the liquidity in half and run one pool on 2% and one on 5%?

we can take data from both pools in parallel

Not sure about the feasibility of this on our end (having multiple pools at different fee levels) but also splitting the liquidity might make the pool less efficient.

splitting the liquidity might make the pool less efficient.

“might” => yes, this is an experiment, it may also create B32B3 arb opportunities that don’t exist currently because there’s no liquidity elsewhere

v3 doesn’t support multiple pools per token.
everything is of course doable but that would mean a pretty large redesign and will also make the (smart contract) interface not as clean.
and it will also most likely reduce the efficiency of the protocol, so I’m generally opposed.

because apparently we’ve been seeing a lot of our recent volume coming from v2.1 to v3 swaps

i’d be willing to chase more data on that

The higher the trading fee is, the less frequent trades bancor will receive.
This is also not a guarantee to collect more fees as volume has the potential to decrease.
Lastly, we have an ongoing conversation on where to “keep” these fees. should they be saved on-curve or off-curve.

bottom line, what i am trying to say is that increasing fees might not generate the result you are after (which seems to be more fees that can help close the deficit and benefit the LPs)

the default state of an AMM is to bleed TKN over time, so fees simply help capital to stop evaporating

as B3 uses shared pools, bancor does not have the luxury of foisting the evaporation back onto individual LP positions like other AMMs do, the overall system has to be net positive in fees otherwise there’s few reasons to deposit

i’d be interested in whether we get more trades and fees overall with 2x small pools with a low fee than 1x larger pool with the same fee, or even 1x large pool with more fees

I mean that if the liquidity is distributed between different pools, the trade size will be limited.
but tbh, single token per pool is one of the fundamentals of v3, it will require a huge benefit to justify such a change which at this point is hard for me to say the tech implications of, other than the fact that it’s most likely a huge change (token address today == pool address).

Seems like this can be accomplished with dynamic fees though, that would be the (technically) preferable solution.

@yudi right now we have:

the main “users” of bancor are aggregators and arbitrage bots, not retail end users, the data i saw on that was that this is by an order of magnitude

aggregators and arbs like liquidity that they can trade between, not one giant pool to buy a token and hodl like a user would

anyway, just food for thought at this stage…

why is it that we can say that “B3 will bring new revenue streams like native staking and lending” but we can’t say “the liquidity we have for TKN is assigned to two trading curves”?

if we discover that having 2x ETH curves with 3000 ETH in them brings in more than 1x ETH curve with 6000 ETH in it, why not just treat that as two “revenue streams”?

I think we should stick to the custom of posting to Snapshot on Sunday’s.

If we post around the week, we are making things more difficult for voters and proposal might be less likely to hit quorum.

Having said that, it’s just a suggestion.

That exact thought came to mind, because I was thinking it would be two different pools, but because everything is virtual anyways in the vault, there can be multiple logical curves in a pool, perhaps aggregators would have to code for it thus to know impact, or somehow Bancor contract choose between each.

feels to me that this conversation is going all over the place.

The discussion here is good but we should stick to the proposal at hand. I think having the fee experiment on $LPL (and other tokens in the future to figure out optimal fees) is worth doing. As to whether Bancor should support multiple pools with different fee tiers (a change in architecture) then we should probably start a new discussion around that

(as it has had some input already here).

FYI, Uniswap already has different fee tiers for the same types of pools and I am guessing there should be some literature out there on whether this is actually beneficial for LPs 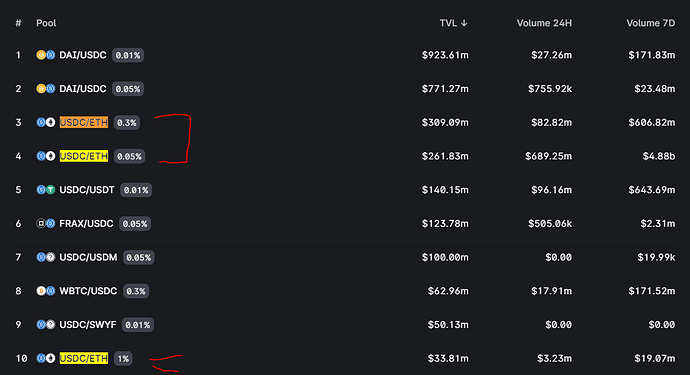 The reason we can increase fees on this pool is because there basically no where else to trade LPL.

I support raising the fee on this pool.

I agree that doing in in steps makes sense, but I support it either way.