Have been a LP provider for 2 years and am a Bancor fan. Appreciate that due to recent issues regarding IL etc the team and contributors doing their best to work on positive outcomes to restore the protocol and I have no doubt they will.

I propose that anyone who has been an LP provider and happened to withdraw during the IL being turned off should, if they can proove through etherscan that they suffered a 50% loss be able to have recourse to those lost funds. Perhaps a caveat would be that they had to have been an lp provider for a certain amount of time?..anyway, although a message came up saying IL turned off, i saw no warning signs or loss of funds messages would be incurred…even metamask confirmation suggested that the full amount would be returned…had their been sufficient warning signs, i would not have bothered withdrawing and just waited for issues to be fixed.

in summary I believe and propose in order to restore faith and confidence in the protocol, if a fix isnt found, that these funds should be reimbursed through the treasury.

Thank you, good luck on the fixes and i hope users see fit to agree.

hat they had to have been an lp provider for a certain amount of time?..anyway, although a message came up saying IL turned off, i saw no warning signs or loss of funds messages would be incurred…eve

When did you withdraw? I personally got so many warning from the UI I thought it went even too far.

Just to add some clarity:

…anyway, although a message came up saying IL turned off, i saw no warning signs or loss of funds messages would be incurred…even metamask confirmation suggested that the full amount would be returned…had their been sufficient warning signs, i would not have bothered withdrawing and just waited for issues to be fixed.

There are two steps when you are going to withdraw from Bancor. The first step is to enter cooldown and it looks like the following: 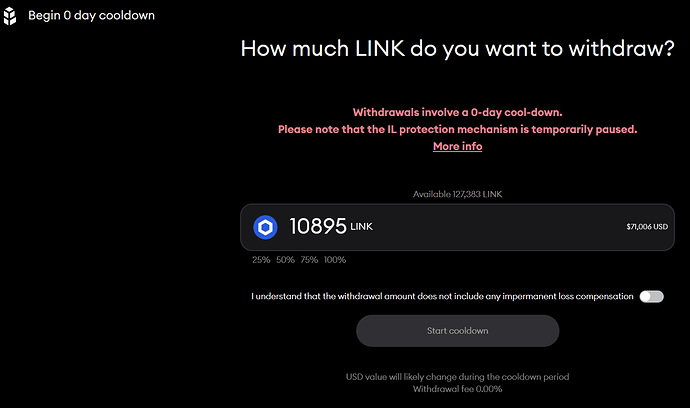 In this step, you will not see the TKN amount you will receive if a pool is in deficit. Essentially, at the moment, this screen only shows you the quantity of TKNs that your bnTKNs pool tokens are capable of unlocking (this is assuming you are able to withdraw without a deficit).

After you enter cooldown, you will see a withdrawal box on the right hand side of your portfolio that matches the amount of TKNs from the cooldown window:

When you actually go to withdraw, this screen shows you the withdrawal amount that you will be receiving based on the pool conditions in the current block. This amount can change from one block to the next depending on the deficit and surpluses in the pool. In this example, the link pool has a deficit and out of the 10895 LINK tokens I will only receive 6084 LINK tokens If I proceed with the withdrawal. 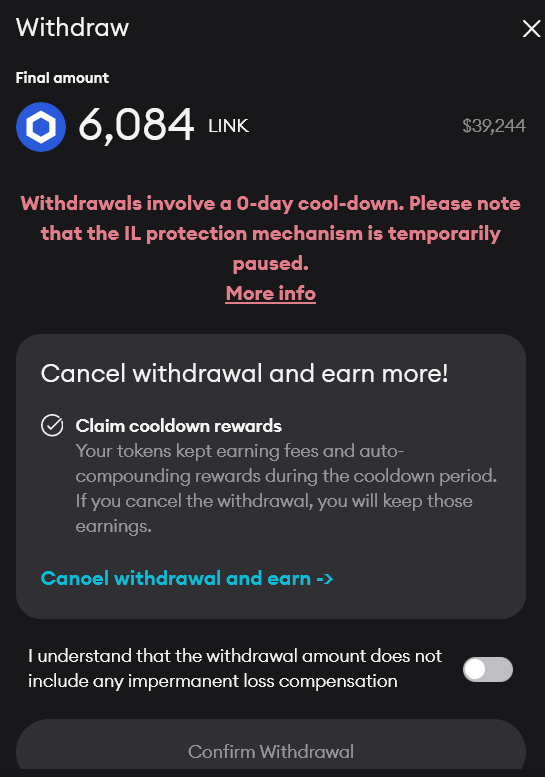 in summary I believe and propose in order to restore faith and confidence in the protocol, if a fix isnt found, that these funds should be reimbursed through the treasury.

To add here, the Bancor DAO does not have a treasury. There are no current funds that are under the control of the Bancor DAO. The protocol itself and any protocol-owned liquidity is owned and managed by the Bancor DAO.

There is a separate entity called the Bancor Foundation. The foundation is a non for profit foundation in Zug, Switzerland whose goal is to fund the development of the Bancor protocol. The Bancor DAO is not privy to their funds or finances.

Thnaks for reply, Glenn. Appreciate the clarity. again, just want to reiterate…it was an honest withdrawal after having been invested in protocol for over 2 years am a fan. I wasnt necessarily removing funds because of recent issues regarding IL just wanted to place them else where…indeed, still got some BNT in the protocol and hope you guys can come up with some solutions which i am sure you will. All my proposal really is asking is that anyone who made a loss by simply withdrawing funds and who has been an investor of protocol been reimbursed some way. Also, to reiterate, I dont think I was given adequate warnings of the 50% haircut…indeed on re checking on etherscan my initial withdrawl transaction was for the full amount…thats why i went ahead with it. My proposal suggests that if someone can show their etherscan activity and have been in the protocol for a while they should be considered.
One question would be…where did that other 50% go? anyway, thanks again…hope that a positive solution can be worked out. I am sure you and all the bancor contributors are working hard to resolve. As said before, trust must be restablished and also to remember that your best clients are your existing ones (of which I still am one!). Thanks and good luck

On July 2nd…an honest withdrawal…esp. after seeing on etherscan that the initial (first part of the transaction) withdrawal was for the full amount…when i saw that, i was pleasantly surprised and went ahead with the rest of the transaction, only to find that i received just under 1/2 the amount. I certainly didnt see any other warning signs. Thanks and all the best…you can see my other replies to see that i still have funds in Bancor and wish them all the best for a positive outcome.

I would wait for the recovery proposal to be made available to the community to see what the entails. I did add screenshots around the withdrawal process and the toggle boxes that need to be enabled in order for the withdrawal to occur (you should have seen your final amount at the time of withdrawal).

If you look at Etherscan, you will have a TX that includes providing your bn pool tokens and getting a smaller amount of the underlying tokens depending on the deficit in the pool. The bn pool token is not necessarily equivalent to the number of underlying tokens that you can withdraw. We always show you the amount that you get when you withdraw (not to be confused with entering cooldown).

Anyway, anyone can propose a reimbursement to the DAO but that doesn’t mean that reimbursements will happen as there is no treasury (also explained in my previous comment).

What is this conclusion based off of? The Foundation’s statement? Your legal determination?

The Bancor DAO has no treasury.