Axie is a battle pet universe that leverages NFTs and Blockchain technology to empower our players in new and exciting ways.

On the surface the game is about:

However, if you look more closely Axie is becoming its own digital nation with a complex economy and emerging tight-knight social structures.

The founding team met each other playing a game called Cryptokitties. We realized right away that NFTs would be huge, and knew that whoever could build out a fun game with an interesting in-game economy would play a major role in defining the future of gaming. Axie is our answer to that mission.

We hope that Bancor can see AXS as an opportunity to engage with an enthusiastic and dedicated new community of LPs. The Axie token is an atypical asset, representing the long tail that Bancor expressed a sincere wish to claim in its early documentation. Axie could be the gateway token to capturing the attention of a growing culture surrounding recreational blockchain utility. As our community becomes integrated within Bancor, we can help to facilitate engagement with adjacent projects, and help to drive further adoption of BNT. Our story is a cautionary one, and you will find no greater advocate for the profound value of Bancor’s IL protection than with us. 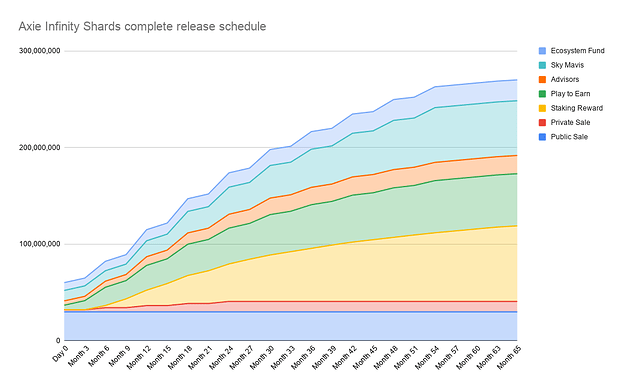 Axie Infinity Shards (AXS) are the glue that binds all Axie community members together.

AXS holders will be able to claim rewards if they stake their tokens, play the game, and participate in key governance votes. Players will also be able to earn $AXS when they play various games within the Axie Infinity Universe and through user generated content initiatives.

Players will be able to lock up their tokens to receive newly created AXS. Stakers will also be required to vote and play to claim rewards.

AXS will be accepted as currency within the Axie NFT marketplace. AXS may also be used to determine eligibility for participation in certain sales/auctions conducted by the Axie team.

In early 2021, the Community Treasury will go live and begin to receive revenues generated by Axie Infinity as well as a portion of staking rewards. This treasury will be governed by AXS stakers once the network has become sufficiently decentralized.

AXS staking acts as an incentive for holding AXS and supporting the ecosystem. Stakers receive freshly issued AXS and will be able to signal their support for various proposals to improve Axie Infinity. AXS stakers will eventually direct usage of The Community Treasury.

Available exchanges: Many (see below)

“As our community becomes integrated within Bancor, we can help to facilitate engagement with adjacent projects, and help to drive further adoption of BNT”

Hope they stay true to their word. Really excited about having $AXS potentially teaming up with Bancor.

looks good to me !

I am fully in support of whitelisting this token and bringing more NFTs based platforms to Bancor. From a security standpoint, this is low risk from our end to whitelist given the long track record of this platform (Alpha version released in 12/2019). They have also done some partnerships with other DeFi platforms (see MakerDao) and I hope that they can reciprocate in the future as we collaborate together.

The majority of AXS liquidity in DEXes reside on Uniswap and Sushiswap with ETH-AXS pools. Liquidity for these pools are roughly 1.6M for Uni and 2.9M for Sushi. Average liquidity and volume in the past 30 days for uniswap:

are roughly 1.35M and 485K respectively. On sushiswap (which has a larger pool) we are looking at:

2.6M and 553K for liquidity & volume. Volume to liquidity if we were to add these together is roughly 26% (1M/3.95M). With a 250K BNT co-investment limit from our side we are looking at roughly 2M in BNT single side liquidity for a potential ~4M pool if the AXS side fills up completely.

I think that we will move almost all LPs over since the IL on uniswap and sushiswap has been massive for this token pair:

If you LP in uniswap 30 days ago then you would be down ~58% today and ~78% respectively on sushiswap. It makes absolutely no sense for LPs to continue on either of these two DEXes with the Bancor pool providing single sided exposure and IL protection from our side.

What tool are you using to get them?

i believe its apy.vision but u need a membership for the better statistics

Yes, this is apy.vision.