This proposal is due to appear on Snapshot on 3rd May, 12:00 pm UTC. Make sure to stake your vBNT for voting before this date and time to participate in the DAO decision.

This proposal previously appeared on Snapshot, prematurely. The DAO guidelines are available in the Information and Templates section of the Discourse page. In particular, the policies set forth by BIP3, BIP12, and the BIP12 Addendum require all proposals to be published to Discourse prior to their submission on Snapshot, with a clearly stated timeframe for voting to begin. While there is no nefarious intent, it is important to maintain the DAO process.

The following text has been appropriated from the proposal on Snapshot.

REN pool, as one of the OG pools on bancor, has been deprived of its LM rewards for too long!

REN is a go-to protocol for cross-blockchain liquidity and using assets from different chains in
DeFi applications, earning yield. In less than 12 months RenVM had almost 4 billion dollars in volume, and its total value locked is 720 million dollars.

As interoperability becomes the key that connects all the different DeFi chains (Ethereum, Polkadot, Solana, BSC, Avalanche…), the demand for using RenVM and the REN token is gonna increase significantly.

REN has been among the first pools on Bancor that provided LM rewards and as of now still has just sub 30 millions dollars in liquidity and 2 million dollars in daily volume. It is true that liquidity did not drop as significantly as expected with the end of the reward period, but rest assured that without the LM incentive the liquidity will slowly dribble away to platforms that will provide more incentive. We can still see REN pool doing even better than The Graph and Matic pool, which have great rewards and are recent.

It would be a shame to lose many REN providers on Bancor. Let’s change that.

I propose to continue the current LM rewards for another 12 weeks to keep liquidity on Bancor and attempt to encourage more deposits.

There is an auditable provenance for the community’s interest in extending the LM program on REN, prior to the reorganization of the Discourse page:

Hey Guys, the REN LM will end in about 9d. I guess I don’t have to explain much how big REN and the RenVM is implemented in the crypto space!?! It is THE BRIDGE when it comes to transfering BTC to Ethereum. Soon there will be Polkadot and BSC as well. In the last 30d there has been a whopping ~790M USD bridged thru the RenVM. The REN Token is required to run a DARKNODE which kind of generates passive income like with being LP! In this case u get mostly paid in BTC and the other assets which…

How is helps the Bancor Protocol

It is imperative to know that the only value on REN token is to bond it into a darknode and receive a share of fees that are generated with use of RenVM. 100k REN is what needs to be bonded for a darknode and quiet frankly for a lot of people that is too much money and they could never run 1 by themselves. Bancor with its one-sided pools, full IL protection after 100 days and great rewards surpasses darknodes rewards and also enables you to be a bit more liberal with your holdings as there is no lockup in bancor protocol.

It would help Bancor, because as we are active in the REN community, so many people are looking for yield on their REN and they can not get anything without a darknode. Many people would add much more liquidity to bancor, and economics incentives are the best to spread the word of bancors amazing AMM experience. With more liquidity and demand for REN the more volume would come in as well, to further boost liquidity providers profitability. 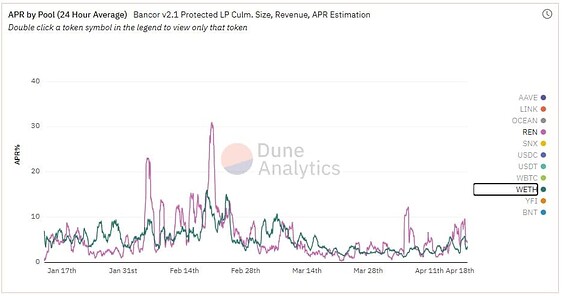 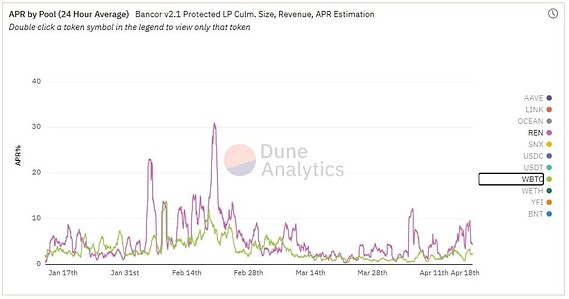 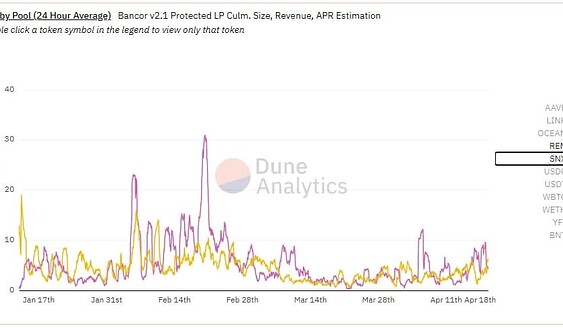 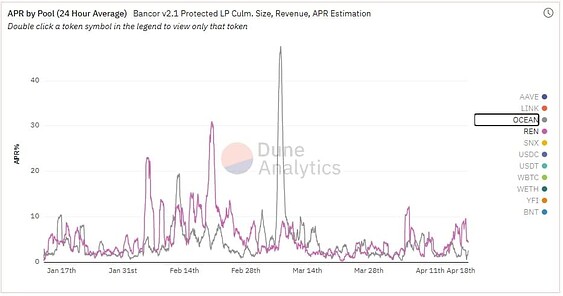 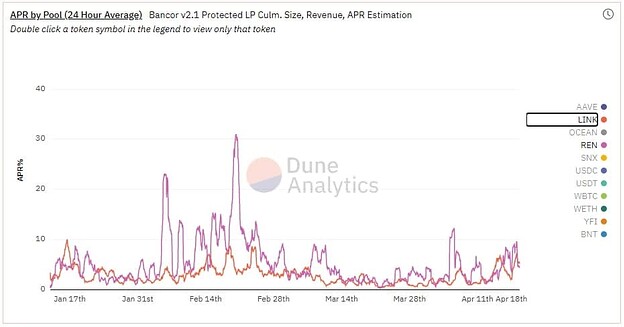 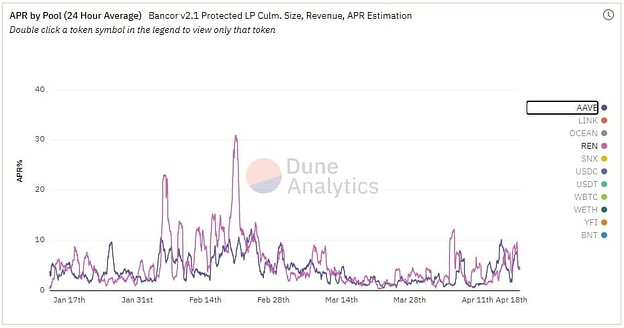 I saw there is currently another vote live for REN Snapshot

Does this mean there is another one coming? Or should we vote now on the current one?

It didn’t follow the rules. Starting up the process from scratch to make it compliant with DAO guidelines.

A Guide to BancorDAO Due Process Information and Templates

This document covers: The creation and publication of new proposals. Submitting proposals to a vote on Snapshot. Obligations to the BancorDAO Anyone can create a new proposal for consideration by the BancorDAO; there is no requirement to hold BNT or vBNT. The guidelines for proposal creation are obligatory, and were written into DAO law with the passing of BIP3 on 24 October 2020. These guidelines have since been updated to reflect the DAO decision making process on Snapshot, and were accept…

I was looking at this yesterday while also looking at another renewal. The REN-BNT pool on Bancor is currently 22M deep and is by far the largest pool as compared to other DEXes: 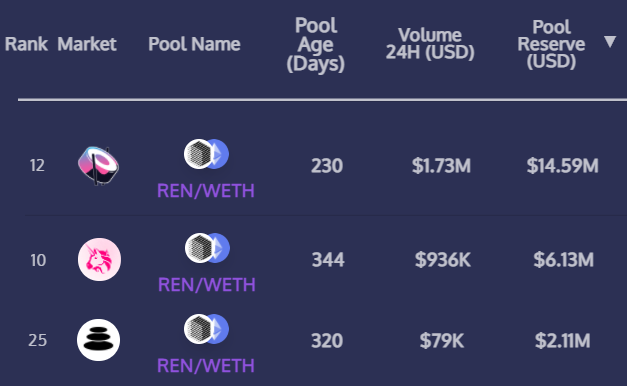 It looks like the liquidity in this pool peaked in the week of 3/15:

and has slightly decreased since then (past 3 weeks have been relatively stable). I don’t think we will see a massive exodus in this pool without LM rewards (I think we would have seen it already, rewards expired on ~3/27). I think we have a good value proposition with single sided staking and IL protection which we tend to sometimes underestimate.

Since volume/fees are usually brought up in these renewals, this is the current data since the week of 12/28/2020 for pools that have come up for LM renewals (current week excluded since it hasn’t concluded):

My dune query was a fork of the Bancor Revenue and Earnings v2.1
query from the official Bancor dashboard but adapted to show weekly fees as opposed to daily.

Will vote, REN is a supreme glue of the DeFi space and they want to help Bancor as well and tighten that bond between the projects. Nice proposal.

Thank you for putting this detailed proposal together. I look forward to voting in favour.

Thank you for your considered analysis, Glenn - I’m always keen to read your opinions on here.

In response, I just quickly wanted to set out my thoughts on the point you raise about the likelihood (or otherwise) of an exodus from the REN/BNT pool should LM rewards not be extended. You are right that there hasn’t been a mass flight to date, but - purely anecdotally - I suspect this is because there has been discussion in the REN community about putting forward a proposal to reinstate LM rewards since the reward period concluded back in March. It may be the case that REN holders have simply been waiting to see if this proposal is voted through, and so have been willing to keep their REN in the pool while the situation develops.

In the event that LM rewards are not extended for the REN/BNT pool, I suspect that rational individuals falling within category (i) will remove their REN and spin up darknodes (as the APR for a REN darknode currently surpasses the APR available on the LM-less REN/BNT pool).

In the same scenario, those individuals falling within category (ii) may continue to provide liquidity to the REN/BNT pool temporarily. There is, however, a third-party pooling solution currently in development (see https://www.renpool.io/). This will allow holders of fewer than 100,000 REN tokens to pool their REN together in order to operate a “share” of a REN darknode. Once RenPool is up and running, it is likely that the APR for a pooled REN darknode will also surpass the APR available on the LM-less REN/BNT pool (potentially resulting in further draining of liquidity from the REN/BNT pool in favour of supporting the REN network (and earning a better yield)).

For these reasons, it may make sense to incentivise temporarily the retention of REN liquidity in the REN/BNT pool in the hope that the APR from swap fees can be driven upwards sufficiently to exceed the APR on REN darknodes (at which point, LM rewards should no longer be necessary to retain REN liquidity in the pool).

(i) will remove their REN and spin up darknodes (as the APR for a REN darknode currently surpasses the APR available on the LM-less REN/BNT pool).

This is interesting and reminds me of running an ETH2 node and also why I decided that it wasn’t worth the effort for the returns. There is a lot of time that get spent on maintaining your nodes (usually unaccounted for), monthly VPS cost, and potentially facing penalties (i.e. slashing if your uptime isn’t good). I think for most, the time spent here isn’t worth the effort unless you are running this as business for others and staking on their behalf (e.g. lido or rocketpool).

There is, however, a third-party pooling solution currently in development (see https://www.renpool.io/). This will allow holders of fewer than 100,000 REN tokens to pool their REN together in order to operate a “share” of a REN darknode.

This seems like a more attractive option for folks and I think most people will opt into such a system. With either of those two options, my understanding is that as more dark nodes come online that the rewards are shared across a large proportion of holders. Potentially, this could mean that the share of fees that you receive could drop unless the fees on the network as whole go up (I am not sure what that looks like on the REN side over the past months). You could reach a point where the current APRs might be lower that what is being offered at the moment (8%-12% as you mentioned) and no longer be attractive. I would also imagine that if you are long on REN then you would reward collect your fees in REN (what Bancor gives you) as opposed to some other token (BTC, DOGE, FIL, DGB, ZEC, BCH, LUNA)

From our side, we would see a similar effect but in the opposite direction if we lose LPs in the pool. With less LPs, our reserves might be smaller and as long as we don’t lose everyone (say enough to be comparable to sushiswap at ~15M) then Volume/Reserve ratio should go up. What this means is that for those that stay in the pool, they might also see higher APRs. FWIW, the lowest 24 hour average APRs on this pool in the past 60 days has been roughly ~.47%. In that time period we have also seen 24 hour average APRs as high as 12.3%:

I am neither strongly for or against this proposal. My position on these renewals has been that we should let other pools have a round at an LM campaign to grow the user base (as oppose to renewing the same set of pools). Out of all of the renewals that have come up, I have only voted in favor for one of them (Aave) and that was mostly a strategic decision (we are looking at getting BNT onboarded as collateral).

It’s not terrible that the pool will shrink. As the pool depth drops, the APY goes up. It is not the case that we need to cling to TVL so tightly. If it isn’t profitable to LP on the REN pool, and spinning up a dark node is a better way to be productive - REN holders should spin up dark nodes instead. Then, the profitability of running a dark node will drop as more REN holders move to that option, and eventually, the economy should equilibrate to a stable APY between the two. We shouldn’t be afraid of LPs leaving - it is better for the protocol if low APY pools start to wind down.

Of course, I would prefer LPs to stay for the long haul, but if the cost is running LM forever, it just isn’t worth it. For anyone.