Introducing Carbon: An update to the Bancor DAO and Community

Introducing Carbon: An update to the Bancor DAO and Community

Since the emergency shutdown of BNT Distribution in June, the number-one priority of contributors has been to increase protocol fees in order to lower the protocol deficit and help restore reserves on Bancor v2.1 and v3.

This post is intended to give the Bancor DAO a high-level update on the recent announcement of Carbon and the role it can play in the continued recovery of Bancor v2.1/v3 reserves, while charting a promising path forward for the Bancor DAO.

First, a little background on how Carbon came to be. While researching a possible dynamic fee structure to apply to Bancor v3, a novel discovery was made. In short, all AMMs today are implemented using a single “bonding curve” that defines the buying and selling of an asset in both directions. In recent months, we uncovered a new way to implement on-chain liquidity where individual liquidity positions can be simultaneously governed by two distinct bonding curves, one for buying and one for selling. Each curve executes orders irreversibly at a fixed price or within a given price range, and can be updated in a highly gas-efficient manner. This “asymmetric” and adjustable concentrated liquidity structure gives users an unprecedented level of precision to personalize on-chain trading and market-making strategies. It also fundamentally changes the status quo in existing AMMs: There is no impermanent loss in Carbon, in the sense that each strategy is not a buy-and-hold liquidity position, but rather the expression of a particular trading view.

Carbon is the first proposed implementation of Asymmetric Liquidity with Adjustable Bonding Curves (“ABCs”). The protocol gets its namesake from the fact that carbon atoms create most of the asymmetry in the natural world, and interact with other atoms via a plethora of different bonding mechanisms.

While Carbon is functionally separate from previous versions of Bancor protocol, the protocol will be governed by the Bancor DAO and utilize the BNT token. Unlike previous Bancor versions, Carbon requires no BNT minting to achieve its novel features. Pending DAO approval, Carbon will generate protocol-earned fees that can be used to lower the deficit on Bancor v2.1 and v3, for example via BNT buybacks and burning. Personally, I will be advocating for the majority (if not all) of Carbon’s protocol-earned fees to be used to restore reserves in Bancor v2.1 and v3.

In general, Carbon is just one of a number of efforts aimed at lowering the deficit, including Almanak’s ongoing fee recommendations, the recent migration of POL and the “Fast Lane” arbitrage proof of concept.

They say “necessity is the mother of invention” and recent months have proven that. In the aftermath of June’s vulnerability and amid a grueling bear market, Carbon was born. I strongly believe it has the potential to not only restore reserves in Bancor v2.1 and v3, but transform DeFi by attracting vastly more liquidity and trading on-chain. Carbon also comes amid a resurgence of interest in fully transparent, on-chain DEXs following the collapse of numerous CeFi platforms.

While no specific timeline has been set, coding on the Carbon contracts, SDK and a user interface are well underway, and the MVP is expected to be developed and deployed significantly faster than previous Bancor versions.

Read the resources below to learn more about Asymmetric Liquidity, Adjustable Bonding Curves and Carbon, the first of many products under the Bancor community’s umbrella. And stay tuned for the first of many live DAO Discussions on Carbon, which will be conducted regularly in Discord. Creating a fully realized engine for flexible on-chain strategies will require many iterations and a diverse group of contributors. To that end, I look forward to working with everyone in the community on this exciting next phase.

Pending DAO approval, Carbon will generate protocol-earned fees that can be used to lower the deficit on Bancor v2.1 and v3, for example via BNT buybacks and burning

My vote is that 100% of fees are used to buy/burn BNT to refill the TKN reserves.

I strongly believe it has the potential to not only restore reserves in Bancor v2.1 and v3, but transform DeFi by attracting vastly more liquidity and trading on-chain.

This is how I view Carbon as well and completely agree. I also think its likely unanimous in using all fees for the time being to reduce the deficit. Moreover it seems to me that we have all the right components in place for a full recovery, its only a matter of time (and if you can stomach the volatility of deficit fluctuations until we’re there). With the release of Carbon it seems like Almanak is flying under the radar and doing great work. I’d be really interested in hearing an update from them in a few weeks. Additionally, the Fast Lane discussion seems like a natural progression of V3 and I’m interested to see how all that develops.

To be honest I’m mentally further into the future when there’s (inevitably) no deficit and what V3 will look like. Maybe I’m too far down that road than most, but I’m looking at the whole Bancor product offering and seeing a ton of promise that I’m sure I’m not alone in imagining what that whole machine will be. The Fast Lane proposal fits really well into the future of V3 in a post-deficit world, where those arbs could add to potential LP’s earnings which in turn increases additional inflows and liquidity. Add to that maybe leveraging Carbon’s infrastructure into V3, but I’m a little out of my depth on that idea. Its interesting to think of a post-deficit V3 where its likely low liquidity for a while, but a system that is then accentuated by Carbon, Almanak and the Fast Lane arbs which could turn it into a super lean and powerful protocol offering. There’s some utility in mentally imagining the protocol without the deficit.

All that being said, it seems to me that its all a matter of time for all of this to play out. I think it’s also important to remember that while we have the immediate problem of the deficit (which can be fixed in the near to medium term), many others are dealing with being wiped out via fraud, which results in either nothing or an out dated court proceeding. I’ll take this all day.

At the request of DAO/Community members, a Carbon Milestones infographic was created and will be updated accordingly. Please note all milestones are being developed in parallel paths. Questions, lmk! 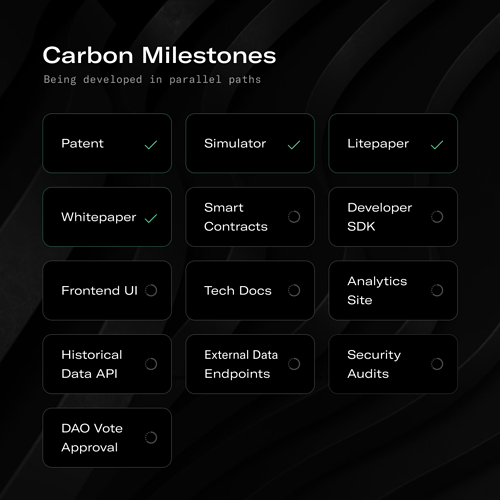 Hey everyone! Today’s Community Call felt great! We’re getting close! Thank you to everyone who attended and for those that couldn’t, a TL;DR for you in addition to the recording being up on YouTube. As always, I encourage everyone to reach out to me with any questions, comments, suggestions, etc!

Most of the work is now focused on the UI/UX and SDK. As for the UI, the skeleton has been built and is going through a user interview process. There were a couple of sticky points being addressed and is where the majority of the development focus remains at this point.

The SDK (Software Development Kit): One of the core components of Carbon. A software package including all of the necessary components to interact with a system. Used for integrations such as those wishing, trading firms and other projects for example, to build an application on top of Carbon. Eliminates the need to develop the software from scratch in order to get started. Just been reviewed and considered to be in a late draft status. A few open ends that need to be cleaned up, but it is in the final stages of development.

Analytics Site: Slightly premature to speak to the Analytics Site just yet, but development has begun. The v3 dashboard served its purpose but there were issues, mainly with auto-updates. The new format is expected to be much more flexible and allow the contributors to do what they were hoping to with the v3 site.

DAO Proposals: Carbon launch in addition to how the fees generated on Carbon will be used. I still strongly support using all fees generated on Carbon going towards buying and burning BNT and helping alleviate the deficit. Please everyone have this discussion on discourse! Let’s keep the conversation going, but rather than on Telegram or Discord, our official governance forum.

Mark stated anything going up on Discourse should be in detail to ensure everyone understands. He is authoring the launch proposal, hopefully this week, and it should be up soon. It will include details on how fees are generated, how they’re stored, and how they can be used. What the process should be, in his opinion, if fees are collected in various tokens, for example. He thinks the fees should always be used to buy and burn BNT in perpetuity- a benefit to stakeholders of any kind and doesn’t pit BNT stakeholders against any other stakeholders. Just because he is writing a proposal doesn’t mean any DAO members need to wait for him to start the discussion and create a proposal of their own. Just be aware it could be the case that something proposed for some technical reasons might not necessarily be feasible. Addendums follow, etc, and in his opinion, the least amount of addendums needed the better. With the amount of material that’s been created already, there shouldn’t be any surprises in the proposal or creation process. More a matter of organizing what’s already been published in addition to implementation details. It’s a huge priority, especially with the audit next week already.

Beta Launch: Pre-Beta Testnet Demo first. It will not be on-chain, but it will give everyone an idea and understanding of not just the use cases of Carbon but the functionality and how users are going to be interacting with the protocol. The end goal is to get people in the mindset of automated trading strategies. A how-to video and documentation are being created for users to understand how to interact with Tenderly. Seeking user feedback on the demo & products in general. Once there’s a good feel, and the Beta is ready, it will be launched.

Simulators: extremely useful tools for applying historic data and testing strategy performance. An upcoming DAO Discussion will be a presentation by Stefan, Bancor Senior Advisor, on how to use the simulator he created.

Nate spoke about his published blog last week, Adventures in Programmable DEX Trading: Carbon Recurring Strategies. Definitely recommend reading if you haven’t yet! Speaks to creating ranges, both profitable and unprofitable, how the width of ranges influences your risk and reward profile, etc. A continuation, looking at a real historical price chart and how different ranges influence the profits, is in the works and will be released as soon as possible. Anyone have any cool ideas or requests for content creation, Nate asks you contact him!

Twitter Spaces Thursday and Coffee Break Friday! Events will be created in Discord. Show you’re interested and get a reminder when the call starts!

Thank you again to the community and contributors. It feels good to be where we are in terms of development and rebuilding. Appreciate you all