I would however, like to see the effects of the vortex not selling BNT for vBNT and simply burning the collected BNT directly ( I am assuming this is only from v2.1 as v3 is already collecting bnt and letting these tokens sit idle )

this is an interesting idea that could be implemented/modeled in the new Bancor design. Instead of relying on arbs to lock up BNT when the vBNT/BNT ratio is high, the protocol can have logic that “burns” BNT instead of swapping the BNT for vBNT. This would put an actual ceiling on the vBNT/BNT ratio rather than an assumed one given arb opportunities. Not sure the complexity of implementing that logic though.

@nhindman can you help me understand plz where the 600k BNT that is being burnt is from? The V3 fee wallet collects BNT from where? This isn’t the same as removing circulating BNT I take it.

The BNT gets collected here:

The Contract Address 0xeEF417e1D5CC832e619ae18D2F140De2999dD4fB page allows users to view the source code, transactions, balances, and analytics for the contract address. Users can also interact and make transactions to the contract directly on...

More info on how this works can be found in the original v3 proposal BIP15 - excerpt below:

The function of the Bancor Vortex remains unchanged in the new release; however, its specific behavior is modified to be more efficient. Rather than collecting a wide variety of token types, the Vortex on Bancor 3 will collect BNT exclusively; fees earned in TKN are swapped immediately for BNT. Therefore, triggering the Vortex results in a single swap of BNT for vBNT directly, rather than a myriad of swaps across numerous TKN pools for BNT as a first step. This simplified arrangement has consequences both for the effective value burned, and an improved gas efficiency overall.

Re changing the tokenomics so that BNT is bought and directly burned on each swap, this indeed could be interesting, and burning BNT directly from the fee wallet is a potential precursor to that adjustment.

V3 BNT vortex is currently “removed” from the market yet it is “expected” to be used to trade for vBNT.
the market reaction is for vBNT burning.

if we announce and burn the BNT, the market will react to this instead.

for this, i do not think the market already reacted to the vortex as we would like to evaluate.

i am for burning BNT from the v3 vortex and evaluate the response.

Im also in favor to burn the BNT that has been collected from the v3 vortex.

I would like to add that I would also like to see the v2 vortex burning BNT directly as well.

I think burning BNT is a worthwhile experiment.

However, I’m wondering if will get people to buy and stake BNT.

How about we do two things:

Would that generate a stronger BNT open market buying pressure than burning the 650 K BNT?

[More thoughts in this thread]

My guess would be that if there is a green light on the BNT burning experiment, we can validate this option. IF successful, there would be a vote to update v2 vortex in the same manner (i assume)

The issue I see with this is that the BNT collected from v3 is simply sitting stagnant. Burning this BNT is likely to be a non-event and carry out no positive nor negative effects.

I am still in favor of burning this BNT

I’m for this, a lot of people miss the point that vBNT is nothing without a strong BNT tokenomics. Burning vBNT should be always supplementary. The vBNT to BNT ratio is irrelevant when BNT goes to 0.

vBNT is nothing without a strong BNT tokenomics.

I agree. However, I’m not convinced that burning the BNT sends a strong enough signal to get people to buy BNT.

Burning this BNT is likely to be a non-event and carry out no positive nor negative effects.

Completely agree with this as well.

I would like to see additional features being placed into the BNT token. I explained a few ideas in another post

Since posting this, a couple more alternatives have been proposed beyond just burning BNT or burning vBNT.

@OverAnalyser has proposed distributing the accrued BNT to BNT stakers, and this driving demand for BNT. I am a bit concerned that this could be viewed as enriching BNT stakers at a time when TKN LPs are in the most “pain”, and could potentially backfire and further harm BNT market sentiment.

Another alternative that has been discussed is continuing to let the BNT accrue in the V3 fee wallet, where it is effectively out of circulating supply, and eventually having this BNT become available as some kind of Bancor DAO treasury. The DAO could, for example, use this BNT to do a token swap with another DAO, use it to fund DAO-issued grants, or for some other future utility that becomes clearer once Bancor’s overall roadmap materializes. Determining the feasibility of this final option (DAO treasury) requires additional legal research, which is currently underway, and will be shared once available.

So current proposed options are:

Some have also expressed the view that burning BNT or burning vBNT will have no material impact on market sentiment and therefore no meaningful effect on the deficit. In their view, we will be effectively wasting the accrued BNT fees, while in the case of burning BNT directly, also harming Bancor’s visibility in Coingecko/CMC due to reducing the BNT market-cap rank.

With these ongoing discussions in mind, I have revised the “expected Snapshot date” above to “TBD”. If, however, someone feels strongly that a yes/no vote on burning BNT directly should be brought to Snapshot now, they are free to push the Snapshot proposal at any time, and vBNT holders can decide the outcome.

And I’m sorry derailing the snapshot by not bringing this up earlier.

I am a bit concerned that this could be viewed as enriching BNT stakers at a time when TKN LPs are in the most “pain”, and could potentially backfire and further harm BNT market sentiment.

As both a TKN and BNT staker, I can emphasise with TKN holders feeling pain. However, I think that the main pain points at: 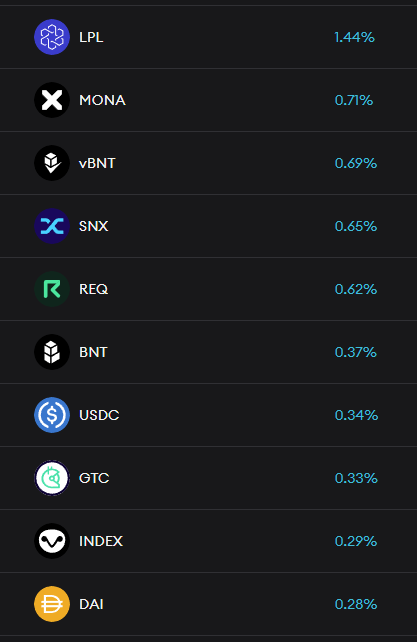 Would a TKN holder see/feel much difference between a vBNT burn, a BNT burn or using the fee income to increase bnBNT income?

Increasing fee income is great, and we should do what we can to raise overall income.

However, for me, I think the best way to reduce the deficit is to increase BNT price. So returning swap fee income to BNT stakers would be my preference (Note, I would not call it LM, too many people associate LM with token inflation - using income is something different [much better and fully sustainable]).

My thoughts are still developing on this. At the moment I’m thinking:

1 and 4 should increase bnBNT income to between 5 and 10% - a very good yield for the current market.
2. Would be intended to help TKN LP’s become comfortable with taking in bancor when the TKN is no longer in deficit.
3. Encourages LP’s to migrate to B3, and burns vBNT for long-term locking of BNT.

If we don’t want to use the 650 K for BNT staking income, then my preference would be to convert it to stable coins or ETH and hold it as a DAO treasury. This could then be used for IL protection on live pools, or (eventually) a compensation pool for people who withdrew without IL protection.

NOTE: I don’t see much point in holding a treasury reserve of BNT, as it is little difference compared to minting BNT when we need to spend it…

If we don’t want to use the 650 K for BNT staking income, then my preference would be to convert it to stable coins or ETH and hold it as a DAO treasury. This could then be used for IL protection on live pools, or (eventually) a compensation pool for people who withdrew without IL protection.

agreed with most of what you said above except for the quoted text.

I whole-heartedly agree with you that increasing the price of BNT is what we need to focus on, and this wont magically happen, nor will the vortex alone be enough for such sustained growth.

Bancor needs to rebuild its reputation and strengthen itself by organically increasing the demand for the BNT token. This can only be done if investors are given a greater reason to buy/hodl/stake the BNT token. As you mentioned earlier, sure, lets give the BNT stakers swap fees. This is not inflating the supply of BNT. I also think that we need to think of an additional layer on top of this to increase the desirability for the BNT tkn

As I mentioned in a previous post, say if staking a # of BNT is required to get the TKN lp ILP coverage for their stake. The amount of BNT needed would be a % from the total $ LP position size, and this value would be floating with the market conditions. I am in no means stuck on this idea, but there must be an idea, creative like this, that can boost the desirability for the BNT token.

Investors will buy BNT if they feel that the price will go up, or that they will earn $$ from staking it. TKN lp’s will buy the TKN if it gives them some advantage within the bancor system to either protect their funds, or increase the yield that they will generate ( similar to curve etc. )

off topic, but still related to things that can be done to improve bancor - @mbr said in a previous call that he was interested in bancor MEV’ing itself rather than some other arbitrageur in order to generate fees. While its beneficial for the protocol to generate fees, I think it would be better for the protocol to protect itself from MEV so that users of Bancor get the best prices. Quite frankly, I more often use other AMMs for trades because I get better quotes everywhere else. So rather than bancor trying to extract even more value from its users, I’d rather see Bancor give more competitive // === prices to that of uniswap, sushiswap, matcha + protect its users from MEV vs MEV its users.

Bancor was never a platform for regular users. Almost all volume is from aggregates and arbitrage.

Also want to point out that MEV arbitrage actually keeps your prices competitive - sandwiching / frontrunning works against a swapper.

It is not a trivial problem to monopolize this market on a protocol level (0 examples) and DEX aggregators are your best anti-MEV strategy already (CowSwap).

Bancor should strive to become a platform for regular users + aggregates + arbitrage.

Other platforms like sushiswap & others have implemented things like https://www.manifoldfinance.com/ ( i dont know anything about ← project ) & other solutions to protect their users from being frontrun .

if the swap rates were comparable to other / AMM’s, then perhaps Bancor would aquire more users / more volume etc.

I dont see why the original AMM having poor swap rates is acceptable // will be acceptable in the future.

Are you serious? Less than two years have passed, and you are already giving up. Why don’t you see the effect of burning vBNT, because this is a long-term strategy, not a five-minute one, and we are just getting close to seeing this effect, and you want to ruin it all. The price of a BNT = 1.12 vBNT if we use all BNT to buy out vBNT, then for the first time we will cross the 1:1 (will BNT = 0.72 vBNT) border, and this will be an impulse for the market.

And what will be the reaction of the market to the burning of BNT? Nothing! Because they have already been withdrawn from circulation, and users could react to such “super idea” only in 2017.

There is not too much vBNT in the system. It’s BNT that needs to be purged. If you keep adding BNT liquidity the deficit is never going to be closed